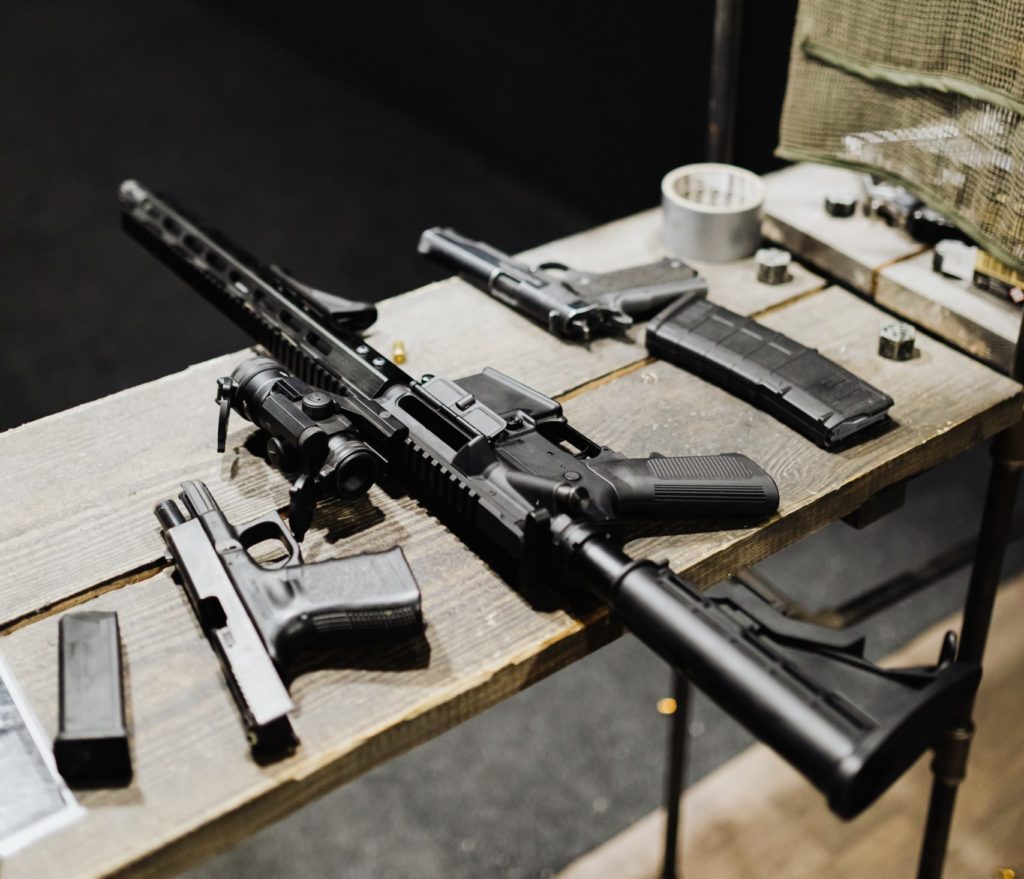 Our everyday lives revolve around rules, some abiding to it and some just ignoring what many call the basic rules. In order to live, you have to eat as a rule or you have to drink water as a rule. Same said with your vehicle, when you need to drive it, you have to insert the key into the ignition in order to start it. Oxford describes the word rule as either a noun or a verb.

Some would even go further by saying; “rules are meant to be broken.” In this guideline, none of the rules can be compromised or even open for consideration to be broken. From the time you pick up a firearm, you become part of a system over which you have complete control. You are the only part of a system that can make a firearm safe or unsafe.

Firearm safety rules apply to everyone who owns a firearm, for those who get into contact with someone who handles and/or owns a firearm and even to children whose parents own a firearm to which they are exposed to either by seeing it in their environment or the unfortunate possibility of handling such a firearm. Rules are not made for a certain group of people but for everyone.

During my research it’s amazing to note how various learned authors and firearm experts define certain firearm rules. Some meticulously believe that three rules suffice while some have six and some ten rules. The amount of rules is not the focus point but, the essence and values of these rules and how it will be implemented, responsibly.

As for the adults, the Firearms Control Act 60 of 2000 as a legislative framework gives you certain powers over the control of your firearm however, you may be guilty of a criminal act in contravention of the Firearms Control Act 60 of 2000 if you keep a loaded firearm within any premises that are under your custody or control and a child under 18 years of age obtains and uses it.

This could result in injury or death, or carries it to a public place, unless you stored the firearm in a locked container or locked the firearm with a locking device to temporarily keep it from functioning.

1.1.  Treat every firearm as if it were loaded.

1.3.  Before handling any firearm, understand its operation.

1.4.  Never rely on any mechanical device for safety.

1.5.   Think before shooting: once you pull the trigger you can’t take back the

1.6.   Never joke around or engage in horseplay while handling or using

1.7.   Be alert at all times; never shoot if you’re tired, cold or impaired in any way.

1.8.   Don’t sleep with a loaded firearm in your bedroom if you sleepwalk, have

nightmares, sleep restlessly or have other sleep problems.

protection.  Endeavour to limit your exposure to heavy metal particulates and gases, and minimize your contact with aromatic organic solvents (such as those commonly used in gun cleaning products.

1.10.  If you see unsafe behaviour any time when firearms are being handled or

used, speak up and take action to correct the unsafe behaviour at once.

1.11.  Receive competent instruction from a qualified person before beginning to

shoot. If questions arise later, after you’ve been shooting for a period of time, get answers to those questions from a competent authority.

2.1.   Never handle a gun when you are in an emotional state such as anger or depression. Your judgment may be impaired.

2.2.   Never shoot a gun in celebration. Not only is it unsafe, but it is illegal as well.

2.3.   A bullet fired into the air will return to the ground with enough speed to cause injury or death.

2.4.   Do not shoot at water, flat or hard surfaces. The bullet can ricochet and hit someone or something other than the target.

2.7.   Avoid handling and using your gun when you are taking medications that cause drowsiness or include a warning to not operate machinery while taking this drug.

2.8.   The loud noise from a fired gun can cause hearing damage, and the debris and hot gas that is often emitted can result in eye injury. Always wear ear and eye protection when shooting a gun.

3.1.   Make sure your firearm is in good mechanical condition before firing it.

3.2.   Periodically have your firearm checked for signs of erosion, cracking, or wear by the factory, by a qualified armorer, or by a factory certified gunsmith.

3.3.   Never try to fire a gun which may have a plugged or partially obstructed barrel.

3.4.   Ensure that any modifications made to a firearm are made by a qualified individual, and that those modifications don’t interfere with your firearm’s safety features.

3.5.   Be sure all accessories, such as holsters and grips, are compatible with the firearm and won’t interfere with its safe operation.

3.6.   Remember a backup firearm carried about your person may be highly valuable to you in the event your primary firearm is ever rendered inoperable or is taken from you by an assailant.

3.7.   It is your responsibility to ensure that your firearm is always either   about your person and under your personal control, or positively secured from access by children or other unauthorized parties. Prevent tragedy: lock down your firearms when they aren’t in use.

3.8.   When storing a firearm for a long period of time, consider storing the slide, bolt, or other critical components of the firearm separately under separate lock and key.

3.9.   Never carry a single action revolver with a round under the hammer unless that revolver is a modern transfer-bar type, equipped with an inertial firing pin.

3.10.    Never carry a pistol with a round in the chamber unless the pistol has an automatic firing-pin block and/or an inertial firing pin.

3.11.    Generally avoid carrying or storing an external hammer-type firearm with its hammer cocked. Exercise extreme care in de-cocking any external hammer firearm: it is very easy to experience an accidental discharge while doing so if your thumb slips off the hammer.

3.12.    Generally avoid unloading a firearm by working the cartridges through the action one-at-a-time; drop the magazine and then eject the round which may be left in the chamber, instead, if possible.

3.13.    Never use a scope mounted on a firearm as a general purpose spotting scope: while observing an area you may end up accidentally aiming your firearm at fellow hunters, or other non-targets.

3.14.    Avoid trying to catch a live round (while unloading a semi-automatic pistol) by cupping your hand around the ejection port while retracting the slide; doing so may result in an accidental discharge.

4.1.   Be sure your gun and ammunition are compatible. Shooting incorrect ammunition in a firearm may cause it to be damaged or even make it blow up.

4.3.   Use only ammunition recommended for your firearm by its manufacturer. Never fire ammunition which exceeds industry standard pressure specifications.

4.4.   Overpressure ammunition will reduce the service life of your handgun, and puts you and those around you at risk of a catastrophic firearm failure.

4.6.   Also remember that a cartridge which has:

4.6.6 the wrong type of primer or an inert primer,

4.6.9 incorrect overall length or any of a host of other defects,

4.6.10 may seriously jeopardize your safety, the safety of those around you, and/or the reliability of your firearm in a defensive situation.

4.8.   Carry only one calibre of ammunition when shooting. Accidentally grabbing the wrong ammunition while shooting can result in a shooter or third party being injured, or damage or destruction of a firearm.

4.9.   Ensure you carry sufficient spare ammunition for your defensive firearm, and make sure you carry it in a readily employable fashion (such as in spare magazines or in speedloaders).

4.10.   Store ammunition that isn’t being used under lock and key, inaccessible to unauthorized parties and children.

5.1.     Always use a holster which is designed for, and which fits, your handgun.

5.2.    Make sure your holster covers the trigger guard of your handgun.

5.3.    Purchase a holster which allows you to obtain a secure grip on your handgun while it is still holstered.

5.4.    Be sure the thumb break, safety strap, or other firearm retention device on your holster is functional and consistently employed.

5.5.    A good holster should retain your firearm during normal carry and routine physical activity, but no holster can insure that a firearm will be secure against determined attempts at disarmament, or keep a firearm secure during all possible physical activities.

5.6.    Avoid clip-on holsters and magazine pouches. These carriers may fail to stay clipped to the belt and end up being drawn along with the firearm or the magazine they still hold, thereby interfering with use of the firearm or with timely reloading.

5.8.    Avoid ankle holsters, shoulder holsters and other types of holsters which can introduce unnecessary delays in accessing a defensive firearm.

5.9.    Avoid carrying a defensive firearm in a purse, pocketbook, daypack or briefcase. A firearm carried in that fashion is: typically hard to rapidly access due to the presence of slow-to-open zippers, multiple latches, etc.

5.10.   It’s often hard to find and draw amidst all the other items routinely carried, since few purses or briefcases include a dedicated handgun-carrying compartment.

5.11.   Briefcases, purses and other carriers are routinely set down or put away in a desk drawer where they may or may not be readily accessible and under your physical control.

5.12.   They are usually vulnerable to being stolen, since purses, pocketbooks, daypacks and briefcases are prime targets for purse snatchers, pick pockets, muggers and thieves.

5.13.   They are also prone to malfunction in an emergency since materials carried along with your handgun in a purse or briefcase may cause the firearm’s mechanism to fail and potentially interfere with its proper operation.

5.14.   Its likely to allow your handgun to accidentally become visible to shop clerks, bank tellers or other parties while you are searching for or locating a credit card, and that inadvertent exposure may potentially result in a tense situation or even a tragic over-reaction on the part of an individual noticing the firearm and/or summoning law enforcement officers to the scene.

5.15.   Never carry a handgun tucked into your belt or waistband without a holster. A handgun carried in this fashion may be unintentionally dislodged, fall onto a hard surface and accidentally discharge or be damaged. Inside the waistband-type holsters will allow you to obtain the concealment of this type of carry while simultaneously providing vastly improved firearm retention.

5.15.2. Always employ a proper magazine holder to carry your spare ammunition. Select a design that secures and protects your magazines while still making them readily available for use. Avoid ammunition loops and ammunition dump boxes.

7.1 Climb a tree with a loaded firearm,

7.2 Cross a fence with a loaded firearm,

7.3 Jump a ditch or ford a stream with a loaded firearm,

7.4 Scale or descend a steep incline or hill with a loaded firearm,

7.5 Climb a tree, or climb into a hunting stand with a loaded firearm,

7.6 Prop or lean a loaded firearm against a tree or other surface which may allow it to slide, or

7.9. Always carry your firearms in a way which will allow you to control where the muzzle is pointing