Gun Laws and the SAPS Must Focus on Disarming Criminals, Not Law-abiding Citizens ActionSA notes with apprehension the controversial Firearms Control Amendment Bill’s proposed restriction on owning firearms for the purpose of self-defence.

Every day, the good, law-abiding and peace-loving people of South Africa are besieged by crime and live in fear, while criminal syndicates act with impunity.

Criminals obtain their weapons illegally, in part by smuggling them through our poorly managed borders. The proposed Firearms Control Amendment Bill will do nothing to prevent the criminals that already have no regard for our Criminal Justice System from illegally obtaining guns.  Disarming law-abiding citizens, however, will only make the lives of criminals easier.

Instead of targeting honest South Africans who are left to defend themselves, our law-enforcement agencies should focus on disarming criminals as part of a holistic effort to turn the tide on violent crime. 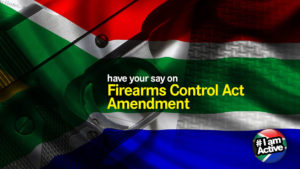 In contrast, ActionSA advocates for making it easier for law-abiding citizens to legally and safely own firearms, whilst streamlining the administrative processes associated with gun ownership. By pairing gun ownership with stringent safety training and measures aimed at promoting responsible gun ownership, it is possible to have a safe private gun ownership regime in South Africa.

It is worth noting that in Police Minister, Bheki Cele’s recent Budget Speech, he proposed an overall budget cut of R11.8 billion while simultaneously increasing the allocation to VIP Protection by R1.7 billion. The impact of this is less money for visible policing and the protection of law-abiding citizens. The misguided allocation of resources is at the heart of our crime-ridden society.

In order to build a safer South Africa, an ActionSA government would therefore implement the following changes:

While the proliferation of unlicensed firearms in the hands of criminals adds to the levels of violence in our society, the answer cannot lie in targeting already vulnerable law-abiding citizens.

To restore the Rule of Law in South Africa we must reform our Criminal Justice System, capacitate law-enforcement agencies, and ensure harsher penalties for criminals. It is must criminals that live in fear of the consequences of their actions, and not the law-abiding citizens of South Africa.