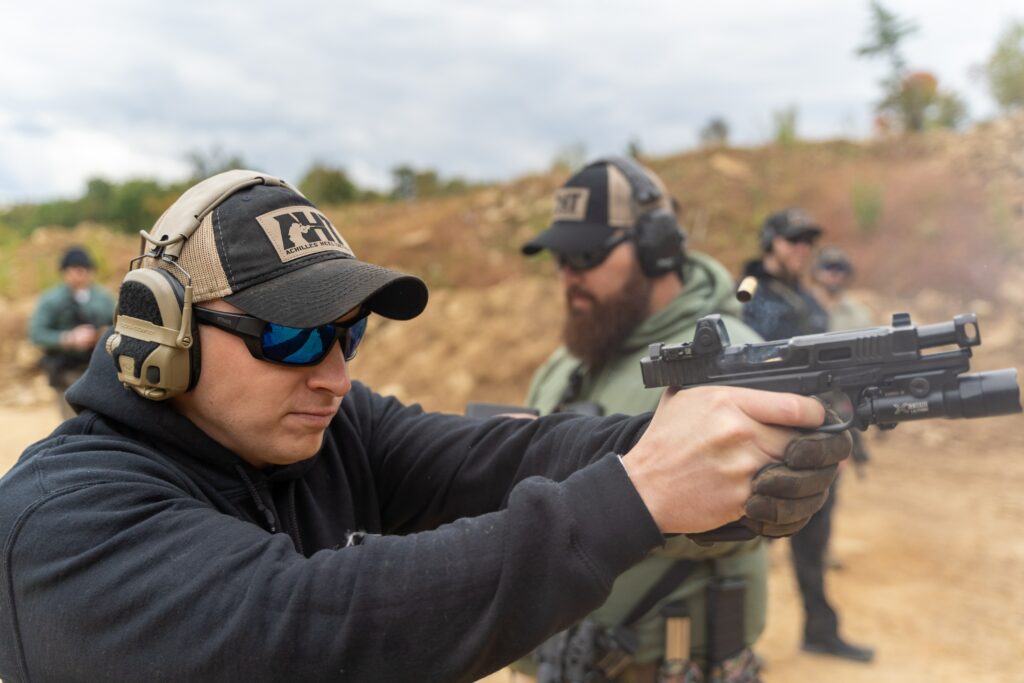 Most citizens of South Africa may share in the benefits of owning a firearm and being able to defend themselves against criminals. It is however important to be aware of rules and regulations in order to use such a firearm legally and safe, not only in public, but also on private property.

To legally possess a gun in South Africa, a person first needs to obtain a licence to possess that firearm – whether he wants to use it for self-defence, hunting or sports shooting. South Africa’s current firearms regulatory framework consists of the Firearms Control Act of 2000 (FCA) as well as some subsidiary legislation.

How many firearms can you legally own in South Africa?

A separate license is issued for each firearm a person owns and an applicant must first obtain a competency certificate in order to apply for the licence itself.

Although South African Law currently provides for individuals to use force – even deadly force – in order to protect their lives and property, it is important to follow the law when it comes to action when you find somebody entering your property and home illegally. The Law is very clear about all the requirements specifying in what circumstances and how a person may protect him or herself from danger.

It is not just for obtaining a licence and going to buy a firearm. An applicant must first complete competence training and receive the training certificate from an accredited training provider, before he or she can apply for a Competency Certificate with his local designated firearms officer (DFO).

Once a person has obtained the competency certificate, he or she can complete a SAPS Application for a Licence to possess a Firearm and submit it to the local DFO.

A person may only possess one firearm for the purpose of self-defence and its licence will be valid for five years from the date of issue. Any person may possess four firearms for occasional hunting or sports shooting but if that person already holds a firearm licence for self-defence, he or she may only apply for three more firearm licences for this purpose since he or she may not possess more than four firearms in total.

There are current efforts to ask parliament to ban the licensing of handguns for use in self-defence under some newly-revived legislative proposals, which also may restrict hunters and sport shooters further regarding how they can use their weapons.

A summary of a draft law was published by the Civilian Secretariat for Police Service (CSP) and showed the intention to seek an update to the law that would mean that no firearm licenses may be issued for self-defence purposes.

This has been greeted by mixed reaction, however, and is heavily disputed by many groups,

Keeping a gun on your property

On successful application for a firearm licence, you have to install a firearm safe according to SABS standards within 14 days. Your premises will be inspected to ascertain whether you have met this requirement before you may take possession of your firearm.

Make sure about the laws that determine gun safe requirements in South Africa and that the safe is installed correctly before the inspection. The correct type of safe, designed to store handguns and ammunition, must be mounted to a solid brick wall or concrete floor by at least two M10 x 80 anchor bolts while a safe designed for storing rifles and ammunition and should be mounted using at least four M10 x 80 anchor bolts.

Secondly, it is important to install the safe in the correct place. According to the SAPS, a gun safe must be installed in the firearm owner’s residence without prescription as to exactly where. It should naturally be installed out of sight; hence most people hide their gun safe in a bedroom cupboard (mostly the master bedroom). A walk-in closet with a lockable door will even be better, especially if it has no windows.

The room that the safe is installed in, should also have a beam connected to your alarm system as a next layer of security.

The Firearms Control Act explicitly states that leaving a firearm unattended is dangerous and irresponsible. According to the Act, a firearm or ammunition must be stored in a gun safe whenever it is not under the direct control of the license holder. You may not leave a firearm unattended, and you may not store a firearm with someone else without written permission from the designated firearms officer.

Trespassers on your property – what to do and not to do

A firearm should be used to ward off danger or to protect others in the form of private defence or yourself in the face of imminent danger, but what constitutes self-defence according to the law?

An attack against you must be unlawful and an attacker must be entering your property illegally, like with a home invasion or house burglary.

The defensive act must be committed when the attack is occurring and must be directed towards the attacker. You cannot attack a third party related to your attacker as a means of self-defence.

Firing your gun on your own property – legal or illegal?

Remember that it is only justifiable to shoot at an intruder in certain rare instances, usually in imminent life threatening instances whereby the intruder was attacking you or armed with a gun ready to shoot you. When there is no alternative but to act immediately, it is lawful for threatened individuals to resort to private self-defence.

Shooting somebody before they’ve done anything to threaten you, but you’re scared, is regarded as illegal. Being scared is not enough reason to act with lethal self-defence. Good training can prepare a gun owner psychologically and physically to face and deal with split-second decision making in such life-threatening situations.

Carrying a blank gun in South Africa – legal or illegal?

According to the South African explosives act, blank guns are excluded from the firearms control act and the user does not require any licence or permit to purchase or carry blank or pepper cartridges.

A blank gun is a non-lethal alternative to a firearm, although it looks, feels, sounds and most importantly works like a firearm. Blank cartridges can be used for firing warning shots to deter intruders and pepper cartridges are purely used for self-defence.

The contents of a pepper cartridge contains a fine synthetic powder and not a ball or a pellet.

Precautions are still required when firing a blank gun, because severe injuries have occurred where blank cartridges have been fired at very close ranges.

Although blank or pepper guns can only deter an intruder and buy time, they are not toys to be abused. As far as safety goes, they should be treated as firearms even though they don’t fire projectiles.

Can you carry a knife in South Africa?

In South Africa, the same level of restrictions as some countries do not apply to laws relating to knives. The Dangerous Weapons Act 15 of 2013, which covers knives and came into force in 2014, defines a dangerous weapon as any object, other than a firearm, capable of causing death or inflicting serious bodily harm, if it were used for an unlawful purpose.

The law aims to protect members of the public from harm, rather than restrict the ownership of these items, therefore it is legal to carry a knife of any blade length if the circumstances for carrying are found to be due to the pursuit of any lawful employment, duty or activity, during participation in any religious or cultural activities, law sport, recreation or entertainment, and for legitimate collection, display or exhibition of weapons.

From a practical standpoint however, it is not recommend carrying a knife around for self-defence, since being within arm’s reach of an attacker is just too dangerous. Rather practice avoidance and situational awareness.

Do you need a license for a gas gun in South Africa?

A gas gun is a non-lethal firearm that shoot projectiles with the help of compressed gas. Unlike live firearms, a gas gun shoots BB pellets pneumatically with compressed air or other gases that are mechanically pressurized without involving any chemical reactions, in contrast to a firearm, which pressurizes gases chemically via oxidation of combustible propellants.

Gas guns are manufactured to prevent the use of live ammunition, often by welding obstacles into a non-removable barrel and using malleable metal alloys. If you consider purchasing a gas gun, you should know the legalities and operating practices associated with this type of non-lethal weapon.

Although gas guns do not require a firearms licence in South Africa there are provisions in the FCA that treat the use and ownership of gas guns in the same manner as firearms. You should know what the parameters are and maintain responsible behaviour, for example, you may not cause bodily injury to any person or cause damage to property by negligently using a gas gun or handle it in a manner likely to injure or endanger the safety or property of any person.

Being a gun owner in South Africa means that you need to be licenced to use a firearm and keep it safely at your home.

The Firearm Control Act explicitly states that you may never leave a firearm unattended and when it is not under your direct physical control, it must be stored in a safe.

Even on your own private property, you are not allowed to use a firearm recklessly and may basically only apply it to save your own life or that of somebody else.

Can I shoot someone on my property in South Africa?

South African Law currently only provides for individuals to employ deadly force in order to protect life, property and all other rights therein.

If you are 18 or older, have a licence for a specific firearm and a safe that meets the requirements, you may keep a gun in your house.

Can I shoot someone trespassing on my property?

In general, property owners cannot use deadly force to protect property, but may only shoot at trespassers in self-defence if they fear great bodily harm or death. Any such force used against a trespasser must be proportionate to harm that is reasonably perceived.

Can you shoot someone stealing your property?

Can you pull a gun on someone trying to fight you?

It is illegal to pull a gun on someone trying to fight you or to shoot them.  Only in self-defence, which means if the State recognises all the elements of the crimes associated with pulling a gun and even killing a person as legal self-defence, you may be acquitted.

Can I shoot someone trying to steal my car?

If a thief uses deadly physical force against you or another person while stealing your car, you could be justified in shooting him, but you or any other person must have been in immediate danger to justify deadly force as self-defence.

Can you answer the door with a gun?

If you act responsible in every way with how you carry your gun, you should be able to answer your door for an unexpected stranger with your gun in plain view, but you may not point the gun at the person.