Firearms: Is pointing a firearm a crime?

The Firearms Control Act indicates that it is an offense to point not only a firearm, but also anything resembling a firearm, like an air gun or an antique, or even a toy gun that might lead anyone to believe that it resembles a firearm of any sort. The item, whether a firearm or not, must not in anyway let someone believe that it could be a firearm, even if it is not able to be discharged.

Every offense or crime has certain elements that must be considered to understand whether an offense is being committed or not. In the case of pointing a firearm, there are 4 elements to the offence, which are:

With regards to pointing an item that may or may not be a firearm, it is important to remember that if someone is to be charged with such an offense, the prosecuting authority wouldn’t need to prove whether a shot was fired, whether the firearm or something resembling one was loaded or whether it was in any way capable of discharging anything and thus firing a shot, the prosecutor need not even prove that the item pointed was indeed a firearm.

A lot of technical debate may arise regarding the definition of pointing a firearm, but simply put, it would mean that if the object was to be discharged, the projectile would hit someone directly, closely miss or hit someone in their vicinity.

Disarming citizens not the answer to stopping gun crime

What would count as a firearm? Well, the definition according to the Firearm Control Act is:

Regarding the person that could be perceived as the victim or the one at the receiving end of the possible offense, it is important to emphasize that the firearm resembling item or an actual firearm must have been pointed at the person. Pointing it at anything else could not be construed an offence under the same sub-section of the act. 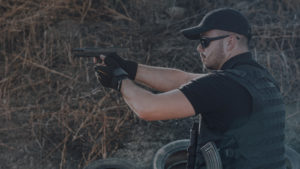 Another element of the offense is the reason for the action. If someone acted in self defence or had other justifiable reasons for his or her actions, a conviction is not very likely. Remember that even police members can be convicted as a result of committing this specific offense, no one is exempt from the crime at hand.

The last, very important element is the intention of the possible offender. The person pointing the object or firearm must  while doing so, be aware that what he or she is pointing could be considered to be a firearm to someone at the other end. This would mean that negligence cannot be considered a reason  due to the pointing being a wilful action by a person. That wilful actions intention can then be questioned to determine the possible justification of the pointing action.