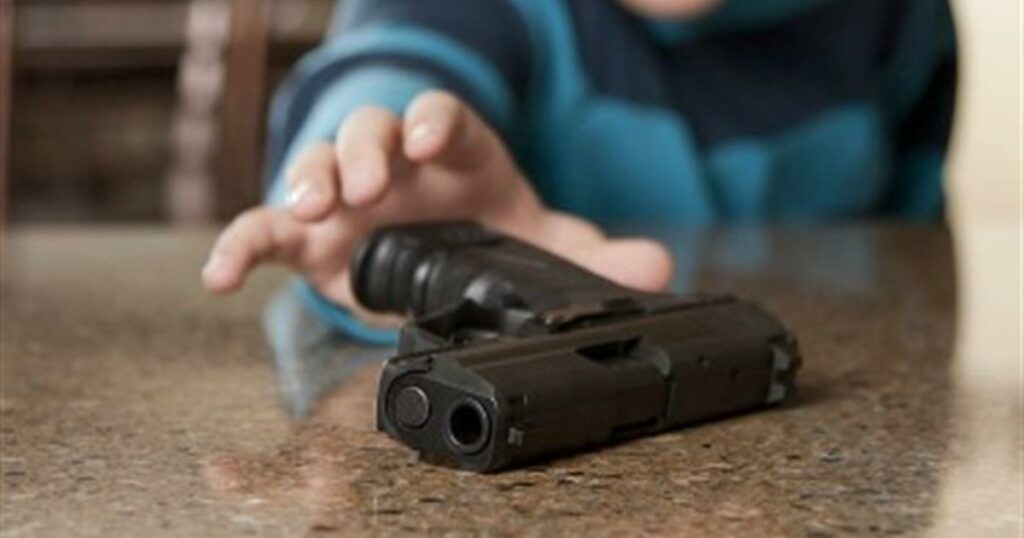 Children are parents’ most valuable assets, but they are playful, active, curious and impulsive. Although these are all healthy traits, they can cause death when mixed with firearms.

The best way to protect children against gun violence is of course to remove all guns from a home, but if guns are kept in a home, like in a country where crime is rife and a person needs to be able to defend him or herself and the family, this is not always the option.

Gun Guide: May I use my spouse’s firearm?

As long as there are guns in houses though, there will always be danger. The only solution that remains is to store and handle those firearms with utmost responsibility, maintain strict discipline as gun owner and teach your children gun safety.

The average child witnesses many acts of violence on television, in movies, and through computer games, of which many involve firearms.

A child often imitates what he or she sees and may also act more aggressive after extensive viewing such violence or playing violent video games.

Parents should help protect their children from the effects of gun violence portrayed in these media platforms and emphasise the belief that such behaviour is not the best way to resolve a problem.

Often though, tragedies where children and firearms are involved, is caused by sheer negligence on the side of parents, therefore it is important for any parent who also wants to own a firearm, to take the utmost care regarding firearm safety and education.

If you and your children have to live with firearms in the home, at least make sure of the following:

Even parents who don’t own a gun, should check with parents at other places where their children go to visit and play, to make sure proper safety precautions are followed since many accidental shootings occur in the homes of friends or relatives.

These kinds of tragedies usually take place when children are left unsupervised.

When adolescents also have access to, and use alcohol when there is a gun available, the risk for violence rapidly increases. Research overseas has revealed that youth suicide victims who used firearms were much more likely to have been drinking than those who used other means.

Factors that may contribute to firearm accidents

Before suggesting any safety suggestions about firearm usage, it is important to identify the contributing factors to these types of accidents.

Many firearm accidents occur because the operator mistakenly believed that the firearm was emptied, made safe, or otherwise disabled when in fact it was ready to be discharged.

Such misunderstandings can arise from a number of sources, like the following:

Safety rules for parents related to using or storing a firearm near children.

Proper maintenance and care can prevent accidents and safety guidelines should include the following:

Firearms are only dangerous when there is ammunition involved, so pay close attention to correct and safe ammunition, as well as its handling.

Firearms are dangerous even when it is not handled, so a parent must pay close attention to the safe storage of his or her firearm.

Measures to prevent unauthorised access to a firearm by minors include the following:

Even while children are still too young to be allowed to handle firearms at all, they can be taught some rules around firearms:

Teach them not to touch, to leave an area where guns are handled and to tell an adult if they witness someone else accessing or handling a firearm without supervision.

Make use of a firearm’s and safety mechanism

Most firearms are equipped with a safety device, which is usually located near the firearm’s action. Common types include the slide, lever, wing, hammer, trigger block and button safeties.

Consult the owner’s manual if you are unsure about how your firearm’s safety works or how to tell when the safety is in the on or off position and always keep your safety on until ready to fire your gun.

Many safeties block the trigger but not necessarily the gun’s firing mechanism, so that a hard blow in the right place may still discharge a firearm, thus, never depend on a safety alone to prevent a gun from firing.

Cleaning firearms in the presence of children

Too many accidents occur when parents are negligent when cleaning their firearms.

Safety advice when cleaning firearms include:

If you decide to keep guns in the home, be aware that teaching kids about gun safety, or to not touch a firearm if they find one, is not enough.

You can, however, reduce the chances of children being injured by following important safety rules like storing all guns in your home safely locked and unloaded, with ammunition locked separately.

Make sure children and teens can’t access the keys or combinations to lock boxes or gun safes. Never keep loaded, unlocked guns in the car, or anywhere else on your property.

When using a gun for target practice, keep the safety catch in place until you are ready to fire it. Always unload a gun before setting it down.

As much as a child may want to try shooting, children are not capable or responsible enough to handle a potentially lethal weapon.

Parents must also keep their children safe in other homes. Many unintentional shootings of children take place in the homes of their friends, neighbours, or relatives, therefor it is also important to make sure your kids are safe when they spend time where other people live.

Add the question whether there may be an unlocked gun in a house to your playdate checklist.

Even if you don’t have guns in your own home, ask about guns and safe storage at the homes your children visit, the same way you’d ask about pets, allergies, supervision and other safety issues before your child visits another home.

Gun Guide: How many firearms can you legally own in South Africa?

Lastly, talk to your children and emphasise that, if they ever come across a gun, they must stay away from it and tell you immediately.