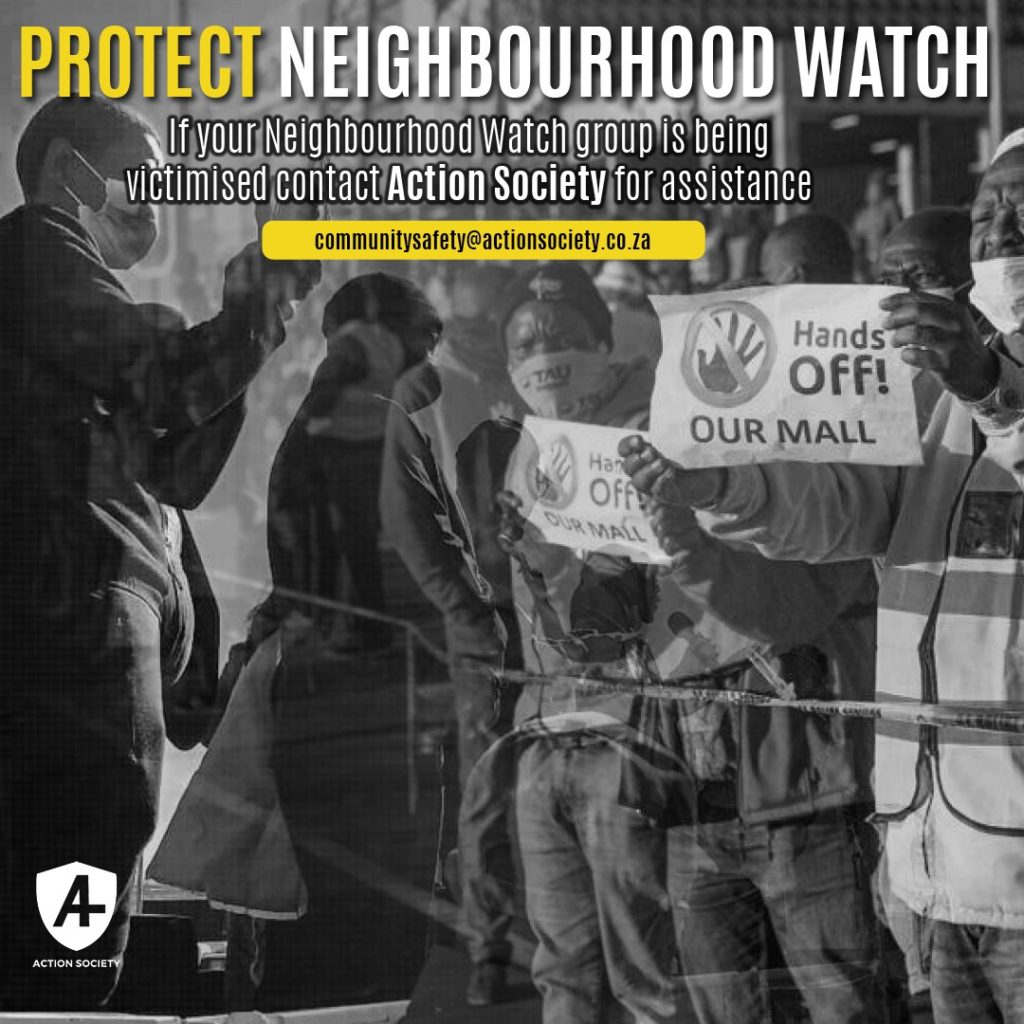 “The police are failing South Africa in the fight against crime as the ANC has neutralised them through cadre deployment, communities must mobilise within the framework of the law and Action Society will assist where they are victimised,” says Ian Cameron of Action Society.

Action Society has launched their “Protect Neighbourhood Watch” campaign to support victimised neighbourhood watch groups that are toeing the line the fight against crime where government is failing. This after threats, most prominently, from KZN premier Sihle Zikalala, that recently stated: “the operation of neighbourhood watch forums will be more closely analysed and regulated.”

“Action Society calls on any Neighbourhood Watch groups that are being victimised ̶ whether in KZN or elsewhere in South Africa ̶ to contact us, if they protected their communities within the framework of the law, during the recent weeks of unprecedented violence in the country.”
Cameron also explained that yesterday police management told MP’s that the recent budget cuts have also impacted the fight against crime.

Lieutenant General Leon Rabie of the South African Police Services (SAPS) said, “As a result, we see growing population compared to reduced police services. The ratio of police to population is increasing. So, at best, (we) had ratio of 1 to 254 and (we’re) currently, seeing ratio of 1 to 327.”

Police in South Africa have “Marikana syndrome” which is leading to total paralysis when it comes to safeguarding communities. Community safety structures in KZN single-handedly and lawfully stabilised the province with little or no support from government. The premier should thank them and even reward them for their actions, not criticise or scrutinise them.
Law-abiding citizens that are organising and mobilising themselves should pave the way forward for a safer South Africa.

The “Protect Neighbourhood Watch” campaign also supports the notion that Bheki Cele should be sacked and would like to see an entire restructuring of criminal justice leadership.

“When police officers fear for their lives, claim certain colleagues are targeting them and colluding with criminals, and sometimes even arming assassins, where does this leave us? The short answer — in a tightening spiral where our security is constantly eroded and where those who try to expose the rot from within put their very lives at risk.” ̶  Caryn Dolley (Daily Maverick).

“South Africa’s biggest security threat is corrupt cops, especially those who are in cahoots with the ANC. Law abiding, tax paying citizens are being duped and lead astray by an inept and incompetent ANC government on the one end, and growing poor community on the other. Law abiding citizens are now and in future going to be more reliant upon themselves for safety, security and economic well-being and can no longer look the the state for assistance,” concludes Cameron.