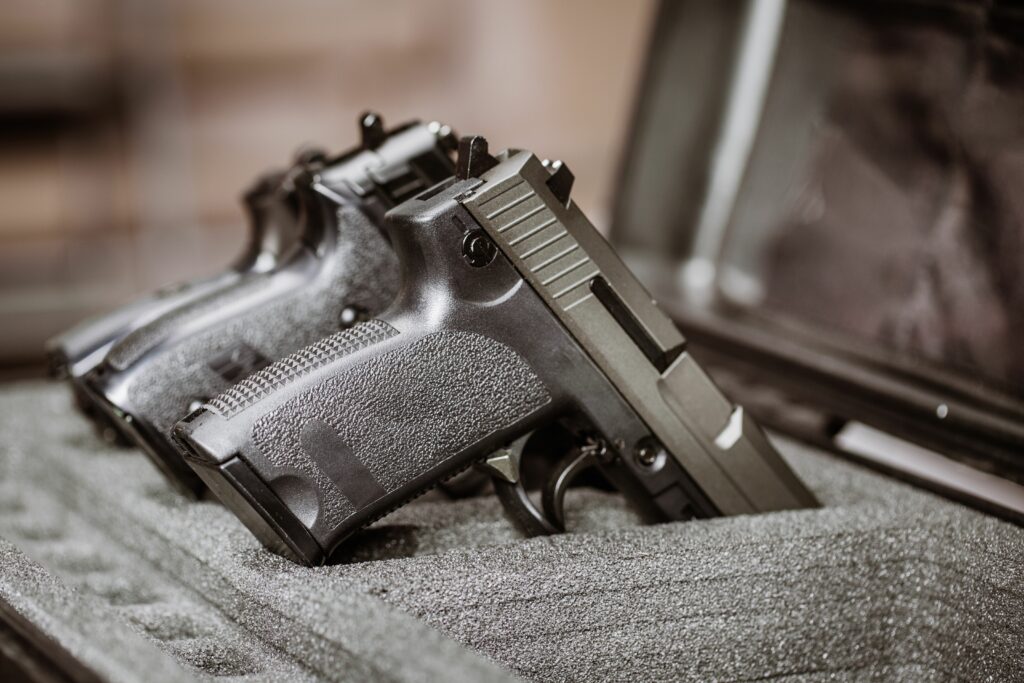 If they land in the wrong hands, the consequences are disastrous. With guns of various sizes and descriptions being used in South Africa, the Firearms Control Act 2000 is supposed to regulate the availability and use of firearms and ammunition as well as to curb its abuse which has contributed significantly to the high levels of violent crime in the country.

The Act is designed to establish a comprehensive system of firearms control, starting with their registration, purchase, licensing and expanding to their use and the way they must be stored.

The Act gives detailed descriptions for the above and makes it a criminal offence to contravene any provision of the Act, so a firearm owner has to know his or her rights and responsibilities when owning, using, handling and storing firearms.

Regulations regarding the storage of firearms

When you apply for a firearm license, one of the legal requirements of being a firearm owner is you must install a gun safe in your home. Such a safe must be installed correctly according to SABS 953-1 Safe Regulations because a firearms officer will come to inspect the installation.

Gun safes for individuals are categorised into type B safes, and type B safes are classified into three types. Type B1 refers to a gun safe designed for handguns, and they have to be mounted to either a brick wall, or concrete floor, or both, by at least two M10 x 80 anchor bolts.

How many firearms can you legally own in South Africa?

A type B2 gun safe refers to a safe designed for rifles and needs to be fixed to a wall or floor, or both, by at least 4 M10x80 anchor bolts. Type B3 safes refer to safes mounted to vehicles and need to be installed by an approved installer to the vehicle’s body.

Prepare before you buy

While you set the ball rolling to get your competency certificate, or even before that, you should acquaint yourself with these rules and install the safe according to the above specifications in a safe area of your home.

When you go shopping for a safe, you can be assured that, as long as you buy a gun safe that is SANS 953-1 approved, it will be the correct type as set out in the SANS 953-1 and will comply with the minimum required standard. If you already own a safe, make sure that it adheres to the standards described below.

The exact requirements of a gun safe in South Africa, as prescribed in the SANS 953-1, states that any type B gun safe that are going to be used to store firearms must have a wall thickness of at least 2.8 mm and a door thickness of 5.75 mm or thicker. The safe must have at least three locking bolts of 20mm thick and spaced at a maximum of 500 mm away from each other.

Deciding on the best place to install a gun safe

Just to have a gun safe to store your firearms, isn’t enough. It is important to establish where you should install the gun safe, since it can be a valuable extra security measure.

According to the SAPS regulations, a gun safe needs to be installed in the firearm owner’s residence. These regulations do not prescribe exactly where it should be installed, so the Designated Firearms Officer can’t tell you where you should install the safe in your home, but it speaks for itself that it should not be installed in clear sight or be easily reachable by any person but yourself.

Most people prefer to hide their gun safe in a bedroom cupboard, which may be ideal because the master bedroom should be the safest room in your house. If you have a walk-in closet with a lockable door and no windows, this will be even better. Your bedroom will most probably also be the place where you will “hide” in case of a break-in or attack and connected to your alarm system.

Your gun safe shall must then be affixed to the floor or wall, preferably to both, or another immovable structure in the room.

When a firearm and ammunition must be stored in a safe

A firearm should never be left unattended, since that is dangerous and totally irresponsible.

According to the Firearms Control Act it is also an offence to leave a firearm unattended. According to the Act, a firearm and ammunition must be stored in a gun safe or strong room that complies with SANS 953-1 or 2 whenever it is not under the direct control of the license holder. You may never leave a firearm unattended and you may not store a firearm with any other person without explicit permission in writing from the designated firearms officer in your area.

Storing a firearm in a vehicle safe

A problem all firearm owners have to deal with, is what to do with it when you participate in an outdoor activity like surfing, swimming, or any other sport in an area where you prefer to have your firearm nearby due to criminal activity in the area.

The solution in such a case would be to install an approved vehicle safe. According to SANS 953-1, a person is allowed to store a firearm in a concealed type B3 safe that is bolted to the body of a vehicle if an alarm and immobiliser is installed in the vehicle.

Such a safe must be installed by an approved installer and a certificate containing the date of installation, the installer’s name, address, and the vehicle’s make and registration, engine, and chassis number, must be obtained from the installer. It must also confirm that the vehicle is equipped with an immobiliser.

According to the SANS 953-1 a firearm may also only be temporarily stored in a type B3 vehicle safe and not for an extended period, so it may not be used as permanent storage, meaning you will still need to install a proper gun safe in your home.

Possession and storage of ammunition

No person may possess any ammunition unless he holds a licence in respect of a firearm capable of discharging that specific ammunition, holds a permit to possess ammunition, or holds a dealer’s licence, manufacturer’s licence, gunsmith’s licence, import, export or in-transit permit or transporter’s permit issued in terms of the Firearms Control Act or is otherwise authorised to do so.

A firearm owner may not possess more than 200 cartridges for each firearm in respect of which he holds a licence, except if he is a licensed hunter or sports shot, or the holder of a licence for an accredited shooting range.

One of the questions many people ask is if he or she may store someone else’s firearm, if he or she doesn’t have a license for the specific firearm. In the past one could have stored someone else’s firearm with only the licensed firearm owner’s written permission, but now Section 83 of the Firearms Control Act, that deals with the storage of firearms, and Regulation 86, that deals with the safe custody of firearms, prescribes otherwise.

In terms of the current Act, a person is only allowed to store anyone else’s firearm if, firstly, the licensed firearm owner gives written permission and, secondly, the SAP gives its consent.

Section 83 and Regulation 86(4) of the Firearms Control Act states the following circumstances under which a person who holds a license to possess a firearm may store a firearm in respect of which he/she does not hold a license:

It is further only the person who holds a license, permit or authorization to possess the firearm that may transport that firearm to and from the place where it is to be stored and the written permission must specify the period for which the person concerned may store the firearm, the reason for the storage and it must contain sufficient particulars to identify the license, permit or authorisation and also the firearm in question as well as the name, identity number and physical address of the holder of the license and the person to whom the authority is granted.

This means that a person may indeed store someone else’s firearm, but only on the following conditions:

– The person who wants to store the firearm must already be a licensed firearm owner;

– The person who wants to store the firearm as well as the licensed holder of the specific firearm must complete and sign the relevant “storage permit” (SAPS 539);

– The SAP must endorse the permission by signing and issuing the “storage permit”;

– Only the licensed firearm owner may transport the firearm to the place where it will be stored and remove the firearm again from the safe where it was stored.

The Firearm Control Act explicitly states the circumstances in which any firearm must be stored while that firearm is not under the owners’ direct physical control.

Even before a potential owner may lawfully possess a firearm, he or she will have to install a proper gun safe in a safe place in his or her home.

After you have taken a firearm in possession, you may never leave it unattended and if you have, for some reason, leave it in possession of another person, you are not allowed to do it without explicit written permission from your local Designated Firearms Officer.

These rules are there for the good of each firearm owner and his loved ones, therefore it is actually just normal common sense to take such responsibility for your firearm, lest it could land up in the hands of a criminal.

If a person is licensed or was in possession of or had control of a firearm when it was lost, stolen or destroyed he must report it to the police station nearest to the place of the occurrence within 24 hours. Failure to do so, is also a criminal offence.

No, if you are 18 or older, have a licence for a specific firearm and a safe that meets the requirements, you may keep a gun in your house.

Does the Firearms Control Act prescribe where a gun safe must be installed in a home?

No, the regulations do not prescribe exactly where it should be installed, but it should not be installed in clear sight or be easily reachable by any person but yourself.

How many firearms can one own legally in South Africa

A person can own only one handgun or a shotgun which is not fully or semi-automatic for self-defence, but he or she may own up to four firearms for the purpose of hunting and sports shooting.

Is there any way a firearm may be stored in a vehicle?

Yes, according to SANS 953-1, a person is allowed to store a firearm in a concealed type B3 safe that is bolted to the body of a vehicle if an alarm and immobiliser is installed in the vehicle.